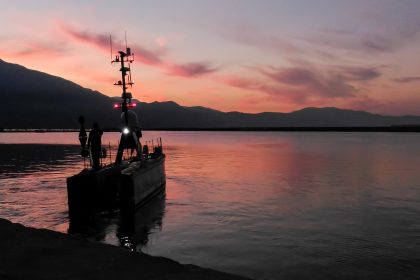 In 2016 Hush Craft Ltd were approached by GEBCO-Nippon Foundation Alumni Team to assist their team in the Shell Ocean Discovery XPRIZE competition. Hush Craft were responsible for designing, manufacturing and operating the unmanned surface vehicle ’SEA-KIT’. After two and a half years of planning and hard work the team have just completed our submission for the Shell Ocean Discovery XPRIZE competition finals, which are currently underway in Greece.

The Shell Ocean Discovery XPRIZE competition will accelerate innovation for rapid and unmanned exploration of the uncharted deep-sea; catalyze markets in deep ocean exploration and discovery; encourage sustainable resource development and protection; illuminate the most mysterious part of the planet and ignite the public imagination. Hush Craft Ltd’s ability to be a one stop shop for designing, developing and operating makes us perfectly suited for such a challenge.

SEA-KIT’s unmanned capabilities feature the ability to control the vessel from an operation centre, located anywhere in the world, no matter the distance from the vessel. This ability for remote operation has also been extended to surveying equipment on board, which includes state of the art MBES systems. SEA-KIT achieves this through its ability to stream live data to the operation centre via multiple satellite links.

Being a truly unmanned but fully compliant vessel provides SEA-KIT with a large variety of economic and environmental benefits compared to a typical research vessel. By eliminating the need for an on-board crew, the vessel size is reduced. The reduced vessel size combined with the hybrid diesel-electric propulsion system results in an approximated fuel reduction of 95%, which in turn significantly reduces the cost of data acquisition.

in both deep and shallow waters.

The images show the underside of SEA-KIT. Here you can see the gondola fitted to house the multibeam and HiPAP for communicating with the AUV from the control centre.

On Friday the 9th of November at 03.00AM, after two and a half years of continual research, designing, planning and testing, SEA-KIT embarked on her mission in the finals of the Shell Ocean Discovery XPRIZE competition. The aim of her mission was to map at least 250 km2 to 500 km2 at depths of 2,000 m to 4,000 m.

SEA-KIT arrived back to shore at 13.30PM on Saturday the 10th of November, 35 hours after her departure. She had completed her mission perfectly to plan, with no physical human interaction. After the data was processed, the team presented their data submission to the XPRIZE judges and are now patiently awaiting the results.

SEA-KIT would like to thank the GEBCO-Nippon Foundation Alumni for including us as part of the team and to the Nippon Foundation for their continued support over the past two years. It has been a privilege for SEA-KIT to be part of such a ground breaking and exciting project.

SEA-KIT International Ltd is building on the foundations laid down by the XPRIZE competition, developing and conducting safe offshore operations and successfully ensuring that the original objectives of SEA-KIT are realised whilst exploring both scientific and commercial opportunities. Working with the GEBCO-NF Alumni team, associates and future clients to benefit great projects such as Seabed 2030, SEA-KIT International Ltd has several exciting opportunities to come in the new year.

We are keen to push new boundaries in many more marine sectors, please contact info@sea-kit.com for more information.